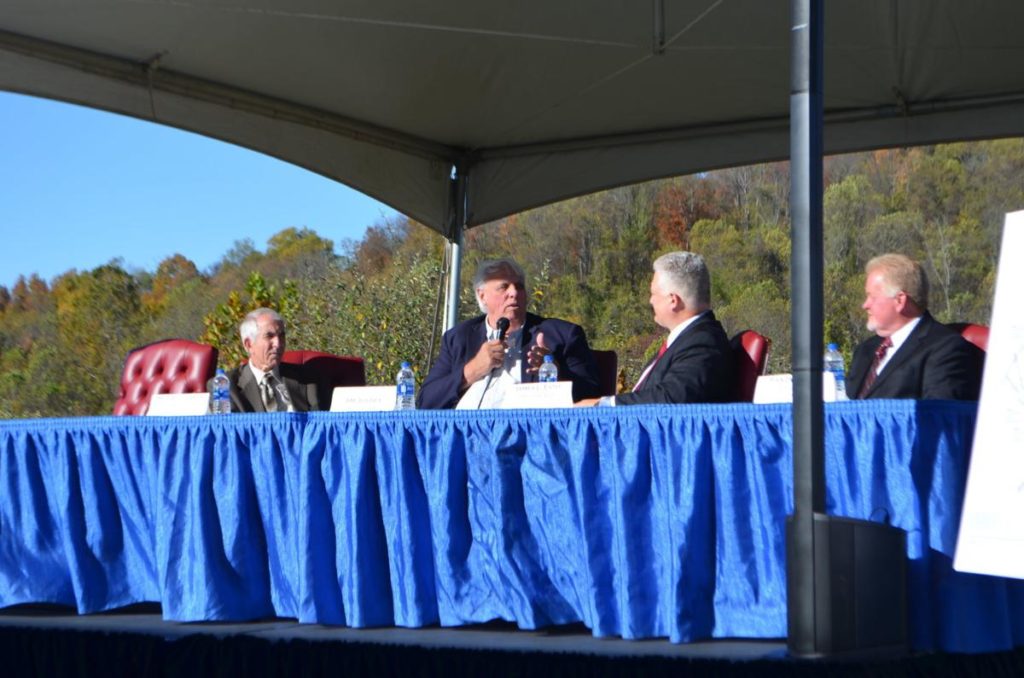 FAIRMONT — Dozens of state officials gathered at the Robert H. Mollohan Research Center Thursday afternoon for the official groundbreaking ceremony for Phase III of development at the I-79 Technology Park.

The expansion of the park, which is owned by the High Technology Foundation, will allow for the recruiting of more federal anchors, which would join ones like NASA, NOAA and others at the facility.

Gov. Jim Justice attended the groundbreaking, saying he was excited for all the park has to offer.

“It’s unbelievable what the potential is,” Justice said. “If you really think about it, you’ve already got 1,000 jobs and 30 businesses here. It is such a sweet spot for the federal agencies coming out of D.C. It’s a standard of life for the people. It’s within a rock’s throw of D.C., but yet it is outside that 250-mile radius by a few miles. It is perfect in everything. …

“The federal anchors will come, and then there will be more and more growth and more and more high-tech, high-paying jobs coming to Marion County. It’s good stuff.”

Jim Estep, the foundation’s CEO and president, said plots of land in the newly expanded park will be offered to STEM-related federal

anchors for free in hopes that not only will the property attract more agencies to the area, but also more work for federal contractors.

“The most important thing they bring is contracting, because the availability of the contracts is what creates the reason for the companies we want to attract to come here,” Estep said. “If we help them create that reason, they’ll come. …

“The more we can recruit, the bigger the critical mass and the business capability. One day, we hope that the economic outlook from all of that is big enough and represents another economic sector in the state.”

Justice said bringing different businesses into the region is a must, allowing for the state’s economy to thrive due to the range of different sectors at play.

Justice also sang the praises of Marion County and the rest of North Central West Virginia, saying the region is a beacon of economic prosperity that sets a good example for the rest of the Mountain State.

“Whether it be tourism or natural resources or high tech or higher ed, there are so many things happening, and they’re happening right in North Central West Virginia,” Justice said. “They’re happening all over our state, as well, but right here is a real sweet spot.”

Estep said planning for Phase III of the park has taken years, and he’s excited to have finally begun work on it. While it will take awhile to finish the project and recruit the needed federal anchors, Estep said it’ll be well worth the wait.

“We designed the whole park holistically at the beginning,” Estep said. “We finally got to the real details of Phase III a few years ago. … I’m happy because we finally got it started. We’ve finally officially opened up Phase III. But if you look at the master plan, you’ll see we’ve got a whole lot more to go. I’m excited to be where we are and excited to keep on doing it.”

Fairmont post Editor John Mark Shaver can be reached at 304-844-8485 or jshaver@theet.com

WVHTC to use $837k grant to help growing entrepreneurs