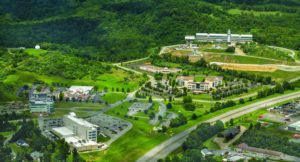 The I-79 Technology Park in Fairmont is home to more than 30 businesses, multiple federal agencies and over 1,200 employees. Submitted photo

FAIRMONT — Despite starting 2018 in bankruptcy, the High Technology Foundation has grown immensely over the past year, starting Phase III of work at the I-79 Technology Park and preparing for more federal anchors.

The technology park, which houses NOAA, NASA’s Katherine Johnson Independent Verification and Validation Facility and a host of other federal anchors didn’t see much in the way of visual change over the past year, but High Tech Foundation President and CEO Jim Estep said a lot of work has been going on.

“(It) turned out to be a very productive year for us,” Estep said. “We, of course, have been working with NOAA to ramp up the enterprise and security operation center in the facility, which is the cybersecurity program for the entire U.S. Department of Commerce. In 2018, we saw the full-scale launch of that program.”

Perhaps the biggest project the foundation is working on is Phase III of the technology park’s development, which entails building a road to unused property in the park, opening up land to more federal anchors.

“Phase III is coming along well,” Estep said. “We’re advertising and soliciting for contractors to begin construction. That’s been slow-moving because of the needs and everything that’s required, but Phase III is on track. 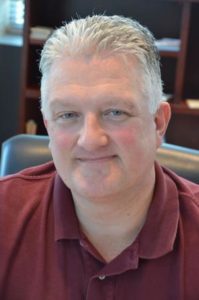 “We are actually in discussions with four different agencies who are looking at the park for expansion. We don’t anticipate getting all four, but we’re hoping for one or two. If we got all four, that would be fantastic, obviously.”

In a unique move, Estep said the land in Phase III will be offered to federal anchors for free, making the move to Fairmont more enticing for the larger operations.

“It’s important that we have the funding to do it, because that creates new building pads that we can then offer for free to federal operations we’re trying to recruit,” Estep said.

“We hope the combination of free land and the existing federal operations and infrastructure that we’ve built here over the last several years makes a very attractive offering to those operations we’re hoping to bring in,” he said.

Thanks to the foundation’s work, occupancy at the park is at an all-time high.

But things didn’t start off so peachy last year. After filing for bankruptcy in August 2016 when Huntington National Bank filed a $20 million federal breach-of-contract against the organization, the foundation rebounded in February 2018 stronger than ever.

“We entered the bankruptcy not because we were out of money, but because we had to make a tactical legal maneuver to address the incredibly aggressive lawsuit that was filed against us,” Estep said.

“Filing the bankruptcy had allowed us to reposition our standing in court to create a level playing field for us to negotiate the situation. Once we were able to work through that and find a position that both parties could live with, we signed the papers to agree with that, and we simply dismissed the bankruptcy,” he said. 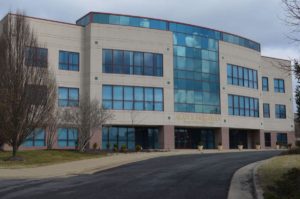 The Alan B. Mollohan Innovation Center in the I-79 Technology Park is where Leidos performs much of the Department of Defense Automated Biometric Information System work. File photo

Aside from Phase III work, the technology park has also seen quite a bit of contracting work, totaling more than $.5 million in the past year alone.

“Our mission is to build a business case in the region for the growth of a knowledge sector,” Estep said. “To do that, we have to develop attractive opportunities for knowledge sector companies to do business in our region. In that regard, when NOAA awarded a $100 million contract to Leidos to support the cybersecurity operation and (last) year when they awarded a $553 million contract to General Dynamics IT for the supercomputing support, those were major milestones.”

Looking ahead, Estep said those contracting opportunities will only become more important. 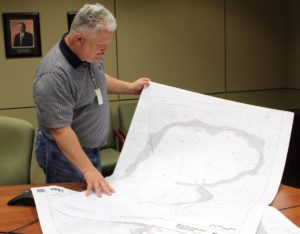 “That kind of contracting availability is fundamentally what building our business case is all about,” Estep said. “We have been working for several years to put those in place, and getting those contracts awarded represented an incredibly important strategic milestone. And our objective is to continue doing that in the foreseeable future.”

Cybersecurity has also been a big focus.

“Now that we have one of the most significant cybersecurity programs here in Fairmont, we have to spend a lot of energy in 2019 recruiting,” Estep said. “We don’t have enough local workforce to fill all of the jobs, so recruiting from out of state is going to be huge.” 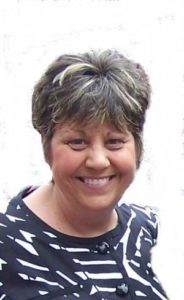 With all that the foundation has going on, officials like Marion County Chamber of Commerce President Tina Shaw have said the technology park is a huge boon to the county’s — and region’s — economy.

“Without the foundation, there wouldn’t be a park, and it wouldn’t have been developed to the extent that it is today,” Shaw said. “The fact that the plans are to move forward with Phase III also says a lot about the part and growth in that sector of business. The foundation and Jim Estep have done a wonderful job keeping the wheels on the wagon during a downtime. They have always had our support.”

However, not everything in the past year has been a major success for the foundation, although even the organization’s setbacks can be turned into strengths.

“In late 2018, we submitted a proposal for the relocation of the U.S. Department of Agriculture, but we didn’t make the cut because several other states really offered significant packages to them,” Estep said. “We couldn’t come close to offering those levels of packages, but now I’m having conversations with the 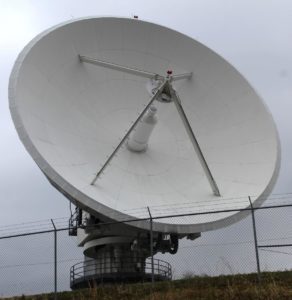 The giant, white satellite dishes at the I-79 High Technology Park are visible to drivers traveling through Fairmont on I-79.

West Virginia Commerce Department and the governor’s office about how we can be better prepared to compete against other states if a large agency relocation comes up again in the future.”

At the end of the day, Estep said he’s more than happy with the progress the High Technology Foundation has made, and he looks forward to doing even more good work in 2019, 2020 and beyond.

“I’m excited for the potential that we’ll get another federal operation that’s able to offer a lot of federal contracting,” Estep said. “I’m also enthusiastic about our workforce recruitment initiative that we’ll launch this year. I’m also excited about plans that the Commerce Department and NOAA have for expanding their supercomputing center activities.”