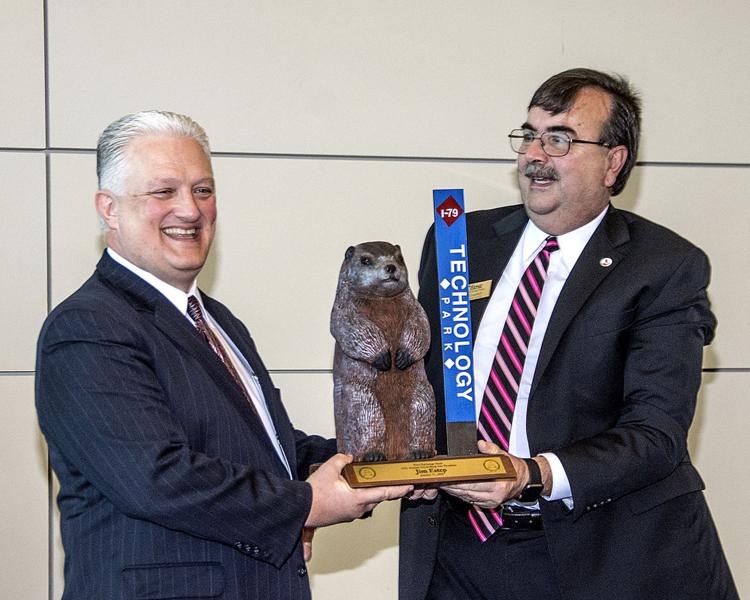 FAIRMONT – The man at the helm of West Virginia’s only tech park challenged a crowded room of guests Friday to become advocates for luring federal government agencies here to set up shop.

Jim Estep, CEO and president of the High Technology Foundation, which manages the I-79 High Tech Park, is on a mission to recruit multiple federal operations to the park. The goal is to grow what is described as the knowledge sector, which brings with it, high-skill, high-wage jobs.

“I trust everybody in this room is tired of being 50th,” Estep said, addressing about 320 guests at the 25th Annual First Exchange Bank Ground Hog Day Breakfast at the Robert H. Mollohan Research Center Exhibition Hall. “How’s it possible that West Virginia can be 50th?”

Estep said the Tech Park is offering federal agencies free land on which to construct their buildings. Agencies that relocate would also have access to new roads and other infrastructure that are currently being built on 200-acres in back of the park.

Estep said the No. 50 ranking often gets misinterpreted as “West Virginians don’t value education,” when the reality is rather different.

He said the No. 50 ranking simply makes it more difficult for the knowledge sector to get a footing in The Mountain State.

So, the High Technology Foundation is taking a lead role to create diversity in the local economy. He calls the strategy economic diversification, not economic replacement.

“We need to stabilize the coal industry. We need to maximize the petrochemical potential. We need to diversify the economy with a knowledge sector,” Estep said.

He said there are two key factors that prove now is the opportune time to approach Washington and lure agencies to move here.

One, he said, is the population density of the Beltway area has grown to a point that the region is now a national security concern.

“God forbid if a dirty bomb were to be exploded in some place like Manassass, Virginia,” Estep said. “The wind currents would blanket the entire region all the way up through Baltimore with just enough radiation to put everything in chaos.”

The second factor, he said, are the economic costs of operating in the capitol region.

“We know they’re outrageous, but recent economic reports have shown that the cost of operations in that area are contributing to our national debt,” Estep said.

Because the Tech Park already houses such federal entities as NASA’s Katherine Johnson IV&V facility and different facilities for the National Oceanic and Atmospheric Administration, Estep said the park is the prime location for other federal agencies.

“Over $200 million of infrastructure investment has been made in the I-79 Technology Park and Research Center in the last decade,” Estep said. “Thanks to recent investments by DQE Corp. from Pittsburgh, we can now offer 400 gigabit per second broadband access in the park. We can compete with anybody in the world.”

So, what can the community do to aid Estep in meeting his goals? Marion County School Superintendent Randy Farley – who attended the breakfast – said the school district is planning a spring conference where education and business leaders will come together to discuss revamping curricula in order to prepare students for the jobs of the future.

Farley said the district currently offers students access to courses that could lead them to careers in the knowledge sector.

“I wouldn’t characterize it as robust, but I would certainly characterize it as available to kids. However, kids have a lot of opportunity in Marion County Schools provided to them if they choose to take it. We do have some programs with robotics and Lego League and rocketry, computer science,” Farley said.

He said he supports Estep’s push to lure federal agencies to Marion County and, perhaps, local students could compete for the jobs of the future that end up coming here.

“Well, hopefully our students would have the opportunity to apply for positions with the business that might come into the park and that’d be wonderful for our kids to stay home, if they chose,” Farley said.

“We spread the word, like everybody else. We want North Central West Virginia – White Hall, Fairmont – to prosper. When they prosper, we prosper. That’s what a community bank is all about is basically getting involved with the community and it also goes back to everybody benefitting.”

Article originally published by the Times West Virginian on February 1, 2020.