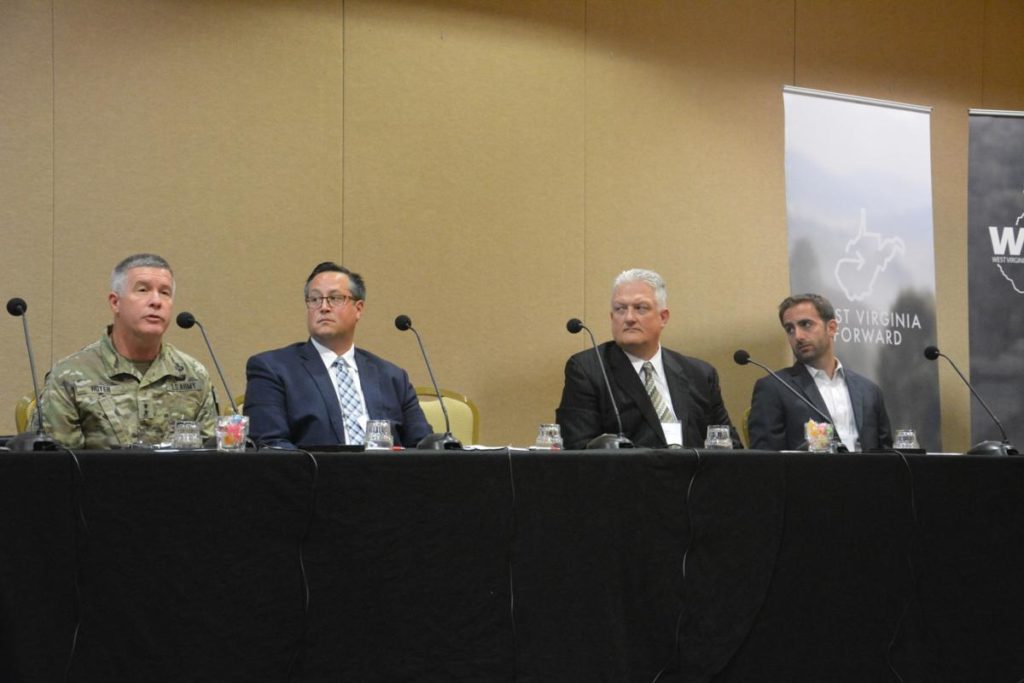 CHARLESTON — In an era of big data, the Mountain State has several valuable assets it can take advantage of in order to be competitive in the high tech-driven 21st-century business landscape.

Such was the subject of several presentations and panel discussions during the second annual Focus Forward symposium held in Charleston Monday. The summit was organized by the West Virginia Public Education Collaborative, Claude Worthington Benedum Foundation and the West Virginia Forward Initiative to bring together leaders in industry and business to share their insights and determine best practices in a variety of fields.

Jim Estep, president and CEO of the High Technology Foundation, pointed to the NASA and NOAA cybersecurity, research and satellite functions at the Interstate 79 Technology Park in Fairmont. He emphasized the importance of drawing in more of these tech functions from the nation’s capital for the sake of rising operating costs, something West Virginia can benefit from.

“We positively have to capture as many of them as we can,” he said, adding that spreading out these functions out from one location is also a matter of national security.

Estep said if the threat of a dirty bomb detonation in the D.C. metro area was ever realized, the effects would cripple the government’s ability to function and be even worse than the 9/11 attacks.

He also pointed out that private weather services for airports, stock markets, businesses and other services are a $1 billion industry. However, with machine learning and the satellite support infrastructure that exists, there is the potential to transform this into a $10 billion industry through partnerships that make data collected by government agencies such as NOAA available to the business community and the general public through cloud operators.

“More than an opportunity for West Virginia, this is a big data opportunity that anyone in the United States would want to be a part of,” Estep said.

Drew Formica, project and program manager for tech company Leidos, said his company once had 14 engineers in the state but in a few years it’s grown to 170 in the North Central region covering all of Leidos’ specialty area: defense, intelligence, civil and health care.

He said the perks of working in West Virginia are the opportunities to partner with educational institutions, hospital systems and government agencies. At the same time, he noted that the I-79 High Tech Corridor is still accessible to the greater Washington, D.C. area while also being cheaper to operate in than Seattle, San Francisco or New York City.

Despite the opportunities, the state still faces challenges.

Gen. James Hoyer, adjutant general of the West Virginia National Guard, noted that the state has business recruitment efforts, but it also needs a dedicated human capital initiative, something he said is very important when it comes to National Guard recruitment as the state’s 18-24 year old demographic is anticipated to decrease. Being able to draw in qualified individuals in cybersecurity and other roles needs to be considered, he said.

“There are veterans who grew up in other places that — if I can match them up with a well-paying job in North Central West Virginia and their security clearance can roll over — they will come here, but we don’t have a concerted effort to do this,” said. “We’ve got to do a better job of this as a state going forward.”

Formica also said the state needs to do a better job of advertising to industry the perks of setting up shop in West Virginia versus large and expensive cities.

Dr. Tom Mitchell, a professor specializing in machine learning at Carnegie Mellon University, said society as a whole is going to have to grapple with how technology and big data will affect it down the road.

For example, he said adopting driverless cars when the technology is perfected will drastically cut down on road fatalities because human operator error will no longer be a factor. However, this will result in lost jobs, such as those of truck drivers.

In another instance, Mitchell said there is no aggregate national health-care database. While digital health-care records are kept by individual institutions, combining them and sharing all that data could lead to more accurate diagnoses. However, Mitchell said privacy issues then surface and it becomes a matter of choosing between better health care with less privacy or vice versa.