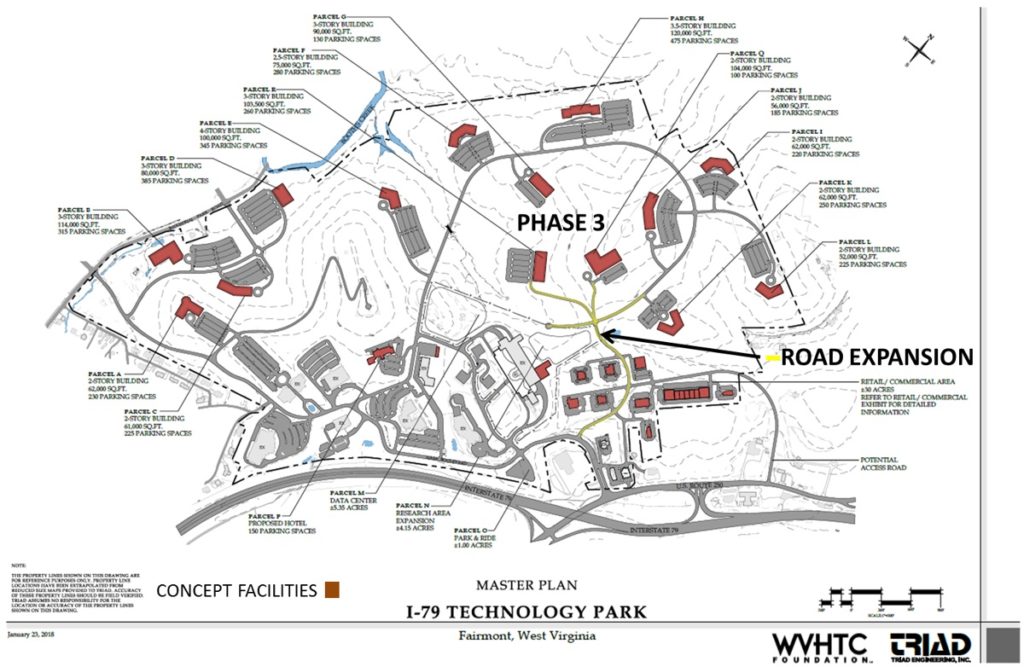 With the beginning of development on Phase III of the I-79 High Technology Park, Marion County officials are hopeful that they can bring more economic diversification to the area.

When Phase III is completed, the park will be able to hold a number of new federal anchors, in addition to those already in place, such as NASA’s Katherine Johnson Independent Verification & Validation facility and NOAA. Jim Estep, president and CEO of the High Technology Foundation, said that the further development of the park comes at a good time to begin recruiting agencies.

“Our Legislature and governor’s office are really worried about Southern West Virginia,” Estep said. “It’s literally Depression-era economics. It’s hard to build a new economic sector anywhere, but especially down there. They’re trying to cling on to coal or manufacturing or steel or whatever. I get that, but we’re in a very unique time…

“There are a ton of agencies trying to move out of Washington D.C. … The (USDA) wants to relocate all 700 people in the headquarters to Kansas City. Of those, 60 to 70 percent said, ‘We’re not going.’ Now, the U.S. Interior Department wants to move out, and there’s a whole slew behind them ready to tee up. We have to capture as many of those as we can… We are so ideally suited if we can just capitalize on it.”

While the recruitment of these federal anchors will be competitive and will take a while, Estep said that having a variety of agencies and sectors in one place could lead to a more prosperous, stable economy for both the state and its residents.

“To do this is very, very hard, but by recruiting these federal anchors here who put out all these contracts which give companies a reason to be here, we are attacking the problem,” Estep said. “We’re slowly but surely building the critical mass up of what will hopefully be a new economic sector that allows people who want to pursue knowledge -sector jobs to stay…

“What we’re doing is trying to create an economic environment that will not only allow families to stay together, but bring them back together. We want to do something that’s never been done, and that’s put in the right economic framework so we’re in the upper echelon of the country.”

Estep noted the state’s record of poor performance in educational attainment and other areas. He said that those pitfalls have helped lead to the state’s lack of economic diversity over the years.

“We’ve been one dimensional economically,” Estep said. “We’ve had one industry, basically, and that was coal and a bunch of peripheral industries that supported it. In that context, you didn’t even need a high school diploma to make a good living. That’s great, but to be a healthy economy, you have to have a balance…

“Over time, kids who have wanted to pursue a career in other areas have left the state because there were no jobs here. What that’s resulted in is the family unit has been broken up. People have to come back from Maryland or Virginia to visit mom and dad. They just come back for the holidays.”

Estep said that while the job is tough, it’s not impossible, and given the foundation’s previous successes with attracting federal agencies to the area, that momentum could allow for more anchors to come in the near future.

“These things take time and effort, but we’ve had an amazing run in the last 10 years on what we’ve been able to recruit. Will that same pattern continue for the next 10 years? I don’t know, but I believe it could definitely repeat and be twice as much because of what’s happening in Washington D.C.”

Workers began Phase III of development at the park — which will build a road to unused sections of the property — earlier this month, and when the first part of the road is completed, Estep said that four parcels of land will be available to federal anchors free of charge.

With everything hopefully coming together in the coming years, Estep said that he’s confident that the I-79 High Technology Park will continue to advance the state’s economic diversification, bettering the lives of everyone in the area.

“We’re trying to rebuild the communities and keep the families together and bring them back together, creating opportunities for everybody,” Estep said. “We want to balance the economy so we’re no longer 50th. Maybe we can be 20th, or better yet, number one.”