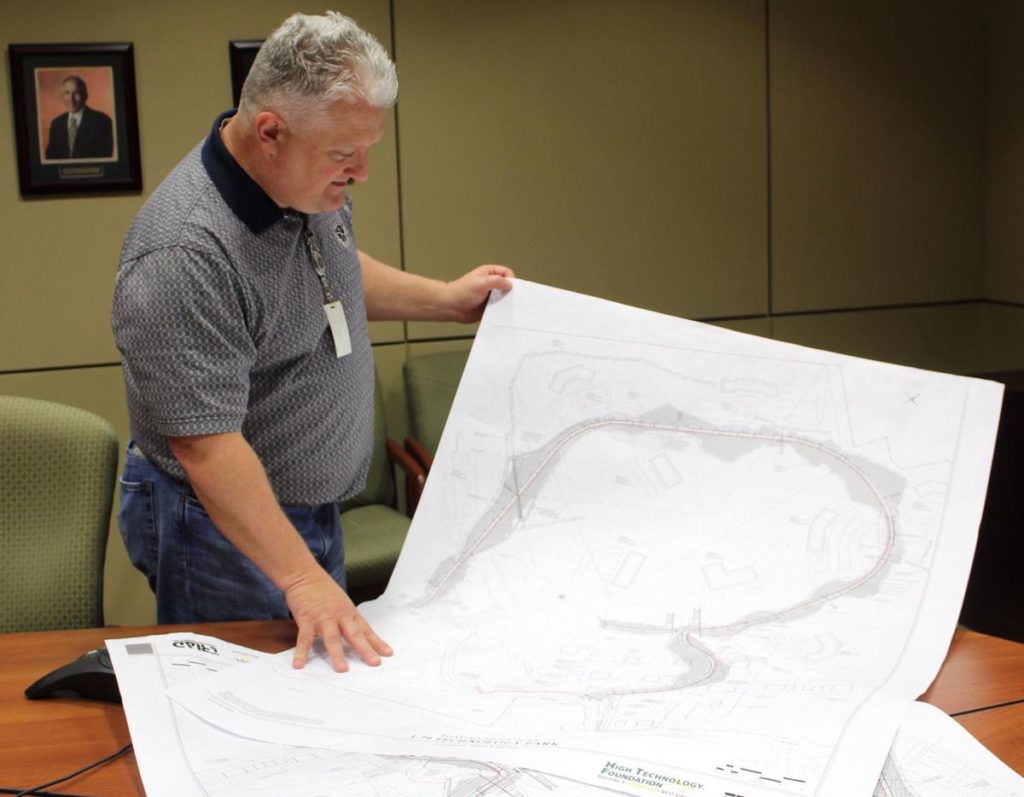 FAIRMONT — Anyone who has traveled through Fairmont on the interstate has seen the sprawling I-79 Technology Park from their car window. The giant, white satellite dishes rising up from the hills are hard to miss.

The park — which is currently home to more than 30 businesses, multiple federal agencies and over 1,200 employees — is more than just a collection of offices and buildings.

Jim Estep, High Technology Foundation president and CEO, believes the facility is the rich, fertile soil where the seeds of West Virginia’s future economy can grow and flourish.

“The High Tech Foundation is an organization whose mission is to help facilitate the diversification of the North Central West Virginia regional economy,” he said. “We’re specifically targeting diversification in the knowledge sector.”

According to Estep, West Virginia has lagged for decades behind the rest of the nation in terms of the types of industries and opportunities available for workers.

“Because West Virginia has been horribly undiversified in terms of economic sectors, we have developed over the decades a very unbalanced workforce demographic,” he said. “We have been so heavily focused, especially on the coal industry, that the workforce that we have in the state is a product of that.”

This has left the state with a workforce that consistently has been ranked 50th in the nation for educational obtainment, Estep said.

“That doesn’t mean that people in West Virginia don’t want to go to college or that they aren’t smart enough; it has nothing to do with that,” he said. “Educational attainment is an indicator of how diversified your economy is.”

Because the state offers few options for educated workers to find a sustainable career, its best and brightest minds often end up moving out of state to find work, Estep said.

“If we had diversified our economy over the last 60 years such that those folks who were getting a high educational attainment and going to college could still be here, then we probably would have seen a greater participation by our state in the national economy,” he said.

The aim of the High Technology Foundation is to end the cycle of economic misfortune by creating a facility that attracts federal agencies and departments, Estep said.

“We’re pursuing an economic development model we call the ‘federal anchor’ model,” he said. “When these federal operations come to our communities, they make federal contracting opportunities available worth tens of millions of dollars. This serves to attract technology and knowledge sector companies to the region, because they want to get that work.”

Each new federal agency the foundation is able to attract helps to attract other agencies and support businesses to move to the area, creating a snowball effect that will hopefully have a positive impact on the state’s economy for generations to come, Estep said.

“Every single time that we can bring one of these federal operations, the business case grows exponentially,” he said. “Our goal at the High Tech Foundation is to continue to recruit these federal operations to the community, until we’ve built up that business case density big enough that it serves as a new economic sector in the state that provides similar economic output to what coal is producing or natural gas is producing.”

The park is already home to multiple federal tenants, including NASA, the National Oceanic and Atmospheric Association and the U.S. Department of Commerce, and the foundation is constantly in the process of working to attract others, Estep said.

The foundation plans to begin work on the Park’s Phase 3 in 2019, which will give it more room for additional tenants, Estep said.

“One of our biggest initiatives for 2019 is going to be building a roads system into the phase of the I-79 Technology Park, which is the northeastern part of the park,” he said. “By this time next year, at the end of 2019, we hope to have at least four new building pads constructed that we are literally offering for free to these federal operations.”

By giving away construction-ready sites already equipped with utilities and other needed infrastructure, the foundation hopes to make its park as appealing as possible to potential tenants, Estep said.

Guy Peduto, director of INNOVA, said the initiative provides the tools, knowledge and expertise needed for new business ideas to get off the ground.

“We work with people with ideas from cocktail napkin to commercialization to market ready, then we do early stage investment,” he said. “The importance of that is it’s an outlet for people with ideas to come get the resources they need to take their idea and actually make it real. We help them with all facets of that process.”

Since its founding in the mid-1990s, INNOVA has worked with more than 400 companies and entrepreneurs and has placed over $1.6 million dollars of direct investments into seventeen West Virginia companies, Peduto said.