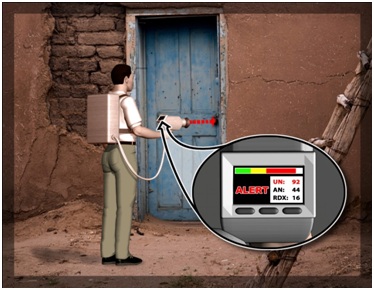 Deep Ultraviolet Resonance Raman Spectroscopy (DUVRRS) may be a particularly powerful technique for the detection of trace explosives residues. Like visible and infrared Raman spectroscopy, DUVRRS signatures have a high level of molecular specificity; however, due to the strong resonances present in many explosives at wavelengths below 250 nm, DUVRRS scattering cross sections can be many orders of magnitude higher than longer-wavelength Raman cross sections. In addition, for excitation wavelengths shorter than 260 nm, there can be no interference from solar background or molecular fluorescence, leaving Raman scattering from other materials as the only source of interference.

Under funding from multiple federal agencies, the High Technology Foundation has been investigating novel spectroscopic approaches, involving DUVRRS, to the standoff detection of explosives and chemical agents. The High Technology Foundation has performed extensive measurements and designed and developed experimental new instrumentation that may soon lead to new tools for military, law enforcement, and homeland security officers to quickly detect and identify trace levels of dangerous explosives and chemicals.

Please Follow the Links below to learn more about our efforts in this area:

Back to Optics and Photonics